Artificial intelligence—you’ve read about it in science fiction novels, you’ve heard tech personalities talk optimistically about it, and you’ve seen headline after headline mention its potential and benefits. As a widely discussed concept, the technology is hard to miss, but how exactly does it work and what does it mean for businesses?

What exactly is Artificial Intelligence?

Renowned computer scientist John McCarthy coined the term in 1956, when he held the first ever academic conference on the concept. Since then, the scope and definition of the technology has evolved. Even until today, numerous explanations exist that cover similar yet different ideas.

Look at it this way: when you look at a family photo, you can easily identify the people in the shot, their facial expression, and their mood. These are tasks that are easily accomplished by humans. AI attempts to mimic human behaviors and decisions like these to augment human abilities.

In the words of AI expert Andrew Ng: “Anything a typical human can do with less than 1 second of thought, it can probably now or soon be automated with AI”.

Whether you’ve noticed it or not, we’re already relying on artificial intelligence in our day-to-day lives. The products Amazon recommends to you, the chatbot that replies to your inquiries on websites, even the way you use Google Maps to gauge what time you’ll get to your destination—these are all powered by AI technology.

These cover just the tip of the iceberg though. The capabilities and possibilities that AI offers are endless, which is why there are still a couple of myths circulating about how it works and what the technology implies.

Let’s dispel some of these myths:

With all the exciting developments and advantages artificial intelligence has to offer, it’s easy to imagine a world where people’s jobs are being made obsolete by robots.

While this is a legitimate fear, it’s also important to remember that AI can only mimic human intelligence to a certain extent. It still cannot wonder about the unknown or provide the human touch, for example.

It cannot be denied, though, that AI can handle repetitive tasks. The artificial intelligence future mainly lies in this area. For one thing, AI can perform tasks in high volume reliably and efficiently. And unlike humans, AI has the processing prowess needed to compute the massive amounts of data that is being generated every second. However, most AI-powered systems still rely heavily on human input—for setup, troubleshooting, monitoring, and continuous development.

But by automating these repetitive, manual functions, AI also allows humans to focus on more complex, cognitive tasks and projects that create more value. In many industries, this will impact current job roles and create new ones, but it will also allow employees to work in a more effective manner. For example, there’s an AI-enabled assistant that helps radiologists generate reports by scanning images and automatically analyzing them for various clinical findings it has studied.

In other words, AI complements human intelligence to be more effective at the workplace, not replace jobs.

2. AI-powered machines can learn on its own

When an AI-powered system is built, it is trained on historical data, a process that involves a lot of human intervention. Data scientists frame the problem, prepare the data, identify the datasets to be used, remove biases, and continually make updates for fine tuning.

In most artificial intelligence examples, systems without data and input from external sources will not function as expected. Not to mention that the information humans are required to feed into the system must have a crystal clear purpose, otherwise the system will not have enough context to work with. In this case, AI is unable to learn without human assistance.

What happens after the system is built though? One could argue that AI continues learning and can identify patterns out of new incoming data. For example, a machine learning algorithm that was used to determine whether a customer will churn or not can also be used to identify whether a patient is prone to Diabetes. The algorithm doesn’t even have to be rewritten.

However, this doesn’t mean that an algorithm can learn by itself. During the learning phase, external input is still required to train a model. Using the same algorithm for a different a data set still demands that a model be re-trained for reliable insights.

On the surface level, AI-powered systems are definitely objective. They’re not subject to emotions and opinions like humans are. Models and algorithms function based on a specific set of rules and associations, with little room for subjectivity. Results can be polluted, but it’s likely because of the quality of human input, not because of the AI’s own whim.

But that’s also one of the reasons why AI cannot be 100% objective—because it heavily depends on human input and humans are innately biased. The model might not be biased, but the data could be. Even the rules set for non-ML AI systems can fall prey to prejudice, especially if it lacks quality control.

The bottom line is, if the system works with biased data sets, it will produce biased results and skewed information. As long as AI relies on human input, bias is inevitable.

It’s easy to compare Artificial Neural Networks (ANNs) to the biological structure that it’s loosely based on: the human brain. But saying that they both function the same way would be a gross oversimplification. Both differ greatly in terms of structure and capabilities.

As one of the more well-known architectures of machine learning, ANNs are an integral part of AI. Like its biological counterpart, artificial neurons have input layers (like dendrites), a processing layer (like the cell body), and an output layer that sends out signals to other artificial neurons (like the axon).

The similarities end there, though. ANNs still come with a lot of limitations when considering processing power and efficiency.

For example, while AI can perform one task exceedingly well, it would fail if the conditions change slightly. Unlike the brain, AI processes signals synchronously, meaning it can execute only one thing at a time. And while biological networks don’t follow a set time to start or stop learning, ANNs have distinct learning and prediction phases.

AI is an impressive feature of technology, but Artificial Neural Networks still have a long way to go to be even comparable to the brain.

5. AI is the same as Machine Learning and Deep Learning

To the uninitiated, the world of artificial intelligence can be confusing especially with the myriad of terms it regularly uses. What exactly is AI and machine learning (ML) and deep learning (DL), and how are they different from each other? While these terms are often interchangeably used, they do not refer to the same thing.

To solve an artificial intelligence task, ML is employed to learn from data and make accurate predictions. And to solve a machine learning task, DL is employed to utilize artificial neural networks to identify patterns and classify information.

Another difference between ML and DL is the processing power required. Deep learning usually involves high-end machines and massive amounts of training data, like when it performs image and speech recognition.

Before companies can effectively implement AI, it’s crucial for them to understand what exactly the technology can do for their business. Knowing its capabilities, its limitations, and its potential for growth can help businesses identify areas of priority and possibilities for adoption.

Regardless of industry, the applications of artificial intelligence are endless. Retailers can get more visibility into what shoppers really want, hospitals can predict whether or not a patient needs to be admitted, and automotive companies can develop self-driving cars.

In this age of constant technological evolution and innovation, incorporating technology is key to bringing your business to greater heights. Artificial intelligence is a good place to start.

Unleash the power of machine learning and analytics on Analance.
See how our platform can deliver insights and decisions in minutes. 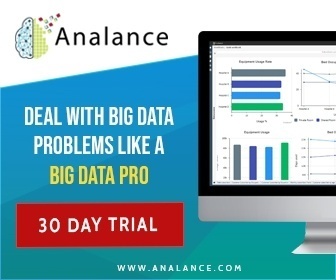